In the 18th century, the first pizza was made in Naples, Italy. For many years, the recipe grew and developed there. When soldiers returned to the United States at the end of WWII, they brought with them their love of pizza. Italian-American families in New York used to make the dish at home. Pizzerias sprang up quickly, each with their take on the recipes. It didn’t take long for pizza to become popular across the country.

We are in total agreement – we love good pizza! So we are excited to now be offering what we think may be the best pizza in Hatboro! Thursdays through Sundays, Chef Dean Cotroneo is now offering his signature Detroit-style pizza to Steel Penny Cafe customers. We invite you to be one of the fortunate first in line to try the incredible pizza he has created.

Chef Dean’s goal is “to make the best Detroit-style pizza that he’s ever had and to share this pizza with as many people as he can.” Chef is passionate about the art of making pizza; come on in and taste for yourself!

NOTE: For the time being, we have changed our ordering system for Detroit-style pizza! To order Detroit pizzas, please call us directly at (215) 346-7500. Quantities are limited, and preorder is required.

Chef Dean Cotroneo has been making pizza since he was 17 years old, and he has spent decades perfecting the art of making pizza dough. You are now able to taste Chef’s wonderful, tasty pizzas right here in Hatboro! Dean is a Montco native, having grown up in Abington, and he attended the Culinary Institute of America in Hyde Park, New York. He won an award for his stromboli during his time at Dino’s Pizza of Warminster, where it earned the reputation as one of the best places to eat and was named “5th Best Pizzeria in PA” by Yelp. Now he’s setting up shop at The Steel Penny Cafe, where locals can try out his delicious new menu items! 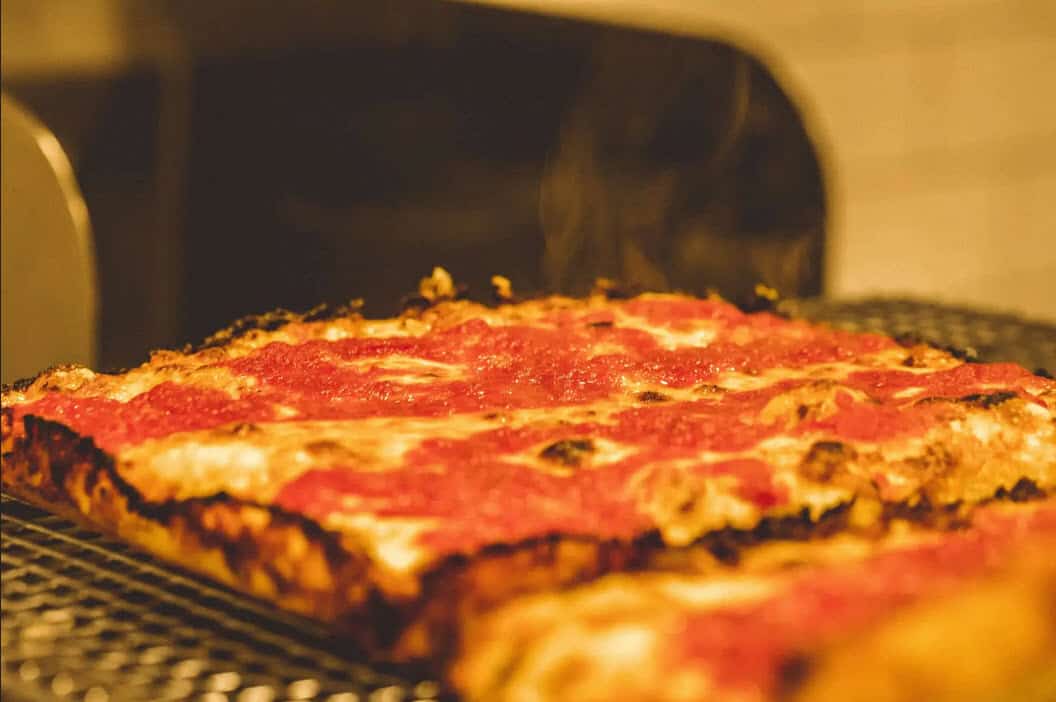 It is unnecessary to let pizza dough rise in the refrigerator overnight – or for up to 48 hours – but it will develop more flavor and air bubbles that will puff up when the pizza is baked. But Chef Dean goes the extra mile – Steel Penny Cafe’s Detroit Style Pizza dough is put through a 72-hour fermentation process, so quantities are limited. We serve these motor-city style pizza pies from Thurs – Sun and take preorders online – click the Order Online link and choose a date up to one week in advance between 4:00 pm and 8:00 pm. Dean’s List members get priority, so we recommend joining!

Gourmet pizza necessitates the use of high-quality ingredients and a strong commitment to the art and craft of pizza baking. We make our crusts from scratch and season them with sea salt and olive oil to make them tastier (and healthier). We top our handcrafted pizzas with generous portions of lean meats, fresh vegetables, and your choice of fresh toppings. Each gourmet masterpiece is topped with 100 percent Wisconsin mozzarella, freshly shredded in-house, and baked to delicious, melt-in-your-mouth perfection.

The pan isn’t the only thing that distinguishes the Detroit Style Pizza. It’s also made with Wisconsin brick cheese, which is a Midwestern specialty. While most people are aware that Wisconsin is famous for its cheese, this cheese stands out. This type of cheese was invented in the late 1800s and has only recently gained popularity, according to wisconsincheese.com. It is not a literal brick, but a style similar to gouda, brie, or mozzarella, and the name is derived from the bricks used by cheesemakers to compress the curds.

The debate always seems to be between Chicago-style and New York-style pizza – which is better, the deep dish pie or the massive thin, crispy slice? Unfortunately, this discussion ignores Detroit-style pizza. The thick, square slices with curly pepperoni peels and crispy base are both iconic and delicious. But you no longer have to travel to Detroit to get a slice (or a whole pie).

Detroit-style pizza has gone from being a local specialty to becoming one of America’s hottest dining trends in the last decade. Pizza chefs from coast to coast are baking their own versions of the Motor City’s crispy cheese crust, and for good reason: it’s incredibly delicious. “Detroit is trending because it’s new to people,” says Brian Spangler of Portland’s well-known Apizza Schools. “It was Neapolitan twelve years ago, and then it was neo-Neapolitan.” Thin-crust pizza has been popular in the United States for about ten years, and I believe people are ready for a change.

Even the big national pizza chains are getting in on the act, with Pizza Hut stating that it is bringing back the pizza due to “high demand.” Pizza Hut said its Detroit-style pizzas sold out two weeks earlier than expected this year, resulting in the company’s best quarterly results in ten years. According to a press release, it was especially popular in Detroit (perhaps out of curiosity), where demand was double the national average. Until recently, the rectangular pizza with Wisconsin cheese, pepperoni, and homemade tomato sauce was the city’s best-kept secret. Until Pizza Hut adopted the concept and created its own Detroit-style pizza. Now that word has spread, pizza makers all over the country are wondering where this delectable pizza came from.

The rise of Detroit’s “red top” pizza as a national food trend, on the other hand, was unexpected. Not long ago, these thick, double-dough squares topped with marinara were only available in a few city pizzerias. Then, all of a sudden, it was on the menu everywhere.

What Exactly is Detroit Style Pizza?

Our Detroit Style Pizza simply enhances a good thing. Square, deep-dish, crispy cheese, and toppings up to the crust. Who could possibly say no? Learn more and place your order for Detroit-style pizza today.

Detroit-style pizza is distinct in several ways: it’s baked in a rectangular steel pan; it has a fluffy, almost focaccia-like crust; its edges are topped with cheese that caramelizes during the baking process; it’s topped with a sauce; and the cheese used is usually Brick Cheese, which melts buttery. If you’ve heard a lot about Detroit-style pizza lately, it’s because Pizza Hut’s recent push in that direction has sparked a lot of interest: people love pizza, and many have never tried Detroit-style pizza.

If this is the case for you, please contact us at (215) 346-7500 – but don’t overthink it! Preordering is required because quantities are limited. However, once you’ve tried one of our pizzas, we are almost certain you’ll be back for more. Yes, it’s a tasty pizza!

The Origins of Pizza

If you’re a true pizza fan, you might be curious as to where pizza comes from. The word “pizza” is thought to derive from the Latin pinsa, which means “flatbread” (although the origin of the word is disputed). According to legend, Roman soldiers stationed in Roman-occupied Palestine developed a taste for Jewish matzoth and created a dish similar to it upon their return. A preserved Bronze Age pizza, on the other hand, was discovered in the Veneto region in a recent archaeological discovery. These early pizzas took on a more modern appearance and flavor during the Middle Ages.

In 1905, the first pizzeria in the United States opened in Little Italy, New York. Anchovies, ground beef, chicken, ham, mushrooms, olives, onions, pepperoni, pineapple, salami, sausage, spinach, steak, and tomatoes are the most popular pizza toppings in the United States. In the twentieth century, several regional variations emerged, including Buffalo, California, Chicago, Detroit, Greece, New Haven, New York, and St. Louis. Deep dish pizza, stuffed pizza, rolled pizza, and stick pizza are among the regional variations, each with seemingly limitless combinations of sauce and toppings. Every day, 13% of the US population consumes pizza. Pizza is available nationwide thanks to pizza chains such as Dominos Pizza, Pizza Hut, and Papa Johns, take-out and bakery pizzerias, and refrigerated or frozen pizzas from supermarkets.

The world’s largest pizza, measuring 1,261 square meters, was prepared in Rome in December 2012. Ottavia was named after the first Roman Emperor, Octavian Augustus, and was made with a gluten-free base. The world’s longest pizza, which measured 1,930.39 meters (6,333 feet 3+12 inches), was made in Fontana, California, in 2017. On the Guinness World Records list, the world’s most expensive pizza is a commercial thin-crust pizza from the Maze restaurant in London, United Kingdom, which costs £100. The pizza is baked in a wood-fired oven and topped with onion puree, white truffle paste, fontina cheese, baby mozzarella, pancetta, porcini mushrooms, fresh mizuna lettuce, and shavings of a rare Italian white truffle. More expensive pizzas include the £4,200 Royale 007 pizza from Haggis restaurant in Glasgow, Scotland, which includes caviar, lobster, and 24-karat gold dust, and the $1,000 caviar pizza from Pizzeria Ninos Bellissima in New York. However, Guinness World Records does not officially recognize these. Domenico Crolla, the restaurateur, also prepared a pizza with red sun tomato sauce, Scottish smoked salmon, venison medallions, edible gold, cognac-marinated lobster, and champagne-soaked caviar. In 2007, the pizza was auctioned off for charity, raising £2,150. In 2017, the global pizza market was worth $128 billion, with the United States accounting for $44 billion, with 76,000 pizzerias. 13% of the US population aged two years and older consumed a pizza on any given day. According to a Technomic study, 83 percent of consumers eat pizza at least once a month. According to PMQ, 60.47 percent of respondents reported an increase in sales year over year in 2018.

Searching for a top-rated restaurant ‘in my area’ that offers pizza and salad? Call now!

Searching for the best restaurants ‘near me’, with great reviews and dine in service? Call now!

Looking for places or shops that serve Detroit-style cheese pie that is highly reviewed and affordable? Call now!

Looking for a shop that is open now? Come to our place for great food and an enjoyable experience!

451A Oakdale Ave
Hatboro, PA 19040
We Have changed our ordering system for Detroit sytle pizza!  To order Detroit pizzas, please call us directly at (215) 346-7500
Quantities are limited and preorder required.