Detroit-Style Pizza:
What Is It?

The History of the Best Pizza in the World

So, what’s the deal with Detroit pizza?
To really answer this question- you’ve got to dig into Detroit history.

Detroit is the largest city in Michigan and is widely known as the Motor City for its connection to the auto industry, music and pizza. Born from these automotive roots, Detroit pizza is distinctive with its square/rectangular shape seemingly reminiscent to Sicilian style- but in fact the taste, process and flavor is much different!

In 1946, a Sicilian immigrant Gus Guerra made the first Detroit pizza-baking the pizza in blue steel forged pans sourced from local automotive factories. Plentiful at the time, these rectangular steel trays reminded Gus of home and little did he know would make the perfect non-stick heat conductor with its steel rectangular shape creating a tantalizing caramelized cheese crust.

Almost a century later this sensational crust, layered pie and secret recipe has become a foodie’s dream and a national favorite. But what exactly makes a pan pizza Detroit-style, and why is a hearty Detroit slice so highly sought after? 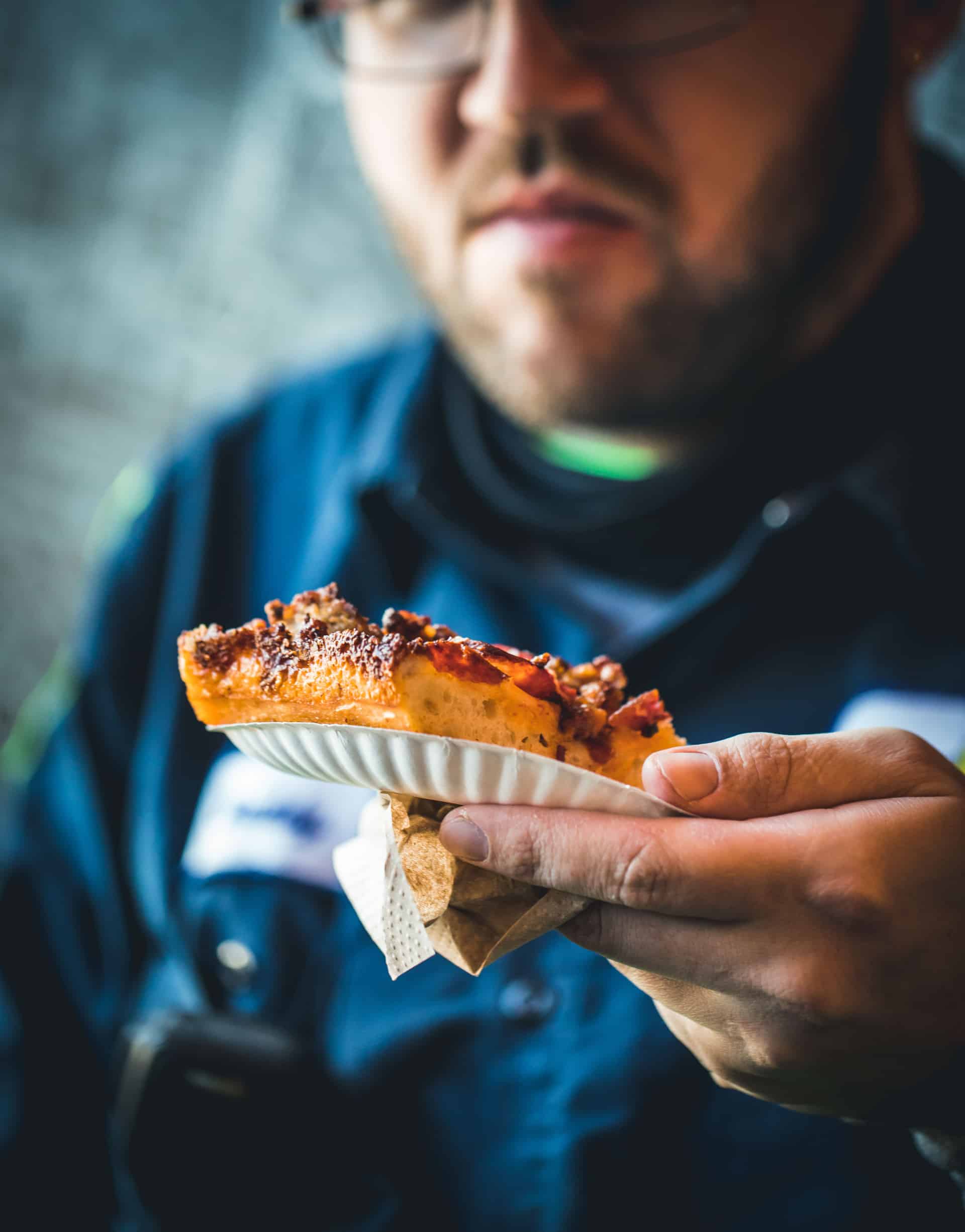 WHAT IS A DETROIT-STYLE PIZZA?

A Detroit-style pizza is built like a pan pizza, with the crust, pan juices and cheese used to build a square pizza. The outermost crust, which is usually thin, is pressed into a diamond pattern which is then dotted with a thin layer of cheese. When a fork is inserted into the crust, the crust begins to rise upward and the “pizza bread” begins to brown. This crust is then sliced, typically 2 to 4 inches long. Once you have the pan juices, cheese and crust on the plate, the pie’s crust continues to cook and begin to crisp up giving the pizza its well-known characteristic of golden-brown, crunchy, chewy layers of crisp crust on the bottom and a gooey center.

To understand what it means to be a Detroit-style pizza, you must understand how it’s cooked. The process to make Detroit Style pizza is roughly 6-8 hours, hence why pre-ordering is imperative. It’s quite different than our Neapolitan pizza. Neapolitan pizzas are made to order because the dough does not have to go through hours of stretching and proofing.

The secret to Detroit pizza starts with the dough. We can’t give away all our secrets, but the process first consists of blending high-quality flours. Once the dough is mixed it goes through several hand-stretching techniques and then it’s cold fermented for 72 hours. When fermented at cold temperatures, the yeast produces carbon dioxide and other molecules more slowly and steadily giving our dough that unique flavor and texture.

After the fermentation process, the dough is left out at room temperature for 2 hours then the panning process begins. This step takes 2-4 hours and is one of the crucial steps in our Detroit-style pizza. Once panned, depending on the weather, this step can take anywhere from 2-5 hours. Once the dough has doubled in size, this is what gives us our light and fluffy texture.

Detroit-style Pizza uses Wisconsin brick cheese instead of the traditional mozzarella. The semi-soft cheese is piled all the way to the edges of the pan, where it melts and caramelizes over the edges creating a golden cheesy crust and a gooey melted middle. The golden cheesy crust along the edges of the rectangle are highly coveted and provide a tantalizing buttery flavor. Add another layer of toppings and special sauce on top and the result is a Detroit deep-dish pizza that’s light, fluffy and packed with flavor.

Once the dough is ready, the pizza is assembled in special rectangular metal pans cheese, beef, and pepperoni cut evenly on the bottom half, leaving a bit of space on top to ensure that the cheese and other toppings aren’t drowning in oil.

The lid on the pan is placed in the bottom and the dough is then evenly spread around the sides of the pan. This is where the key factor of a Detroit-style pizza comes into play: the bottom of the pan is secured at its edges, and everything is then secured in place with a rectangular seam. When it comes time to bake, the top of the dough is flipped onto the outside of the pan to ensure even cooking.

See What Pizzas We Offer

Detroit Pizza isn’t fast food and requires a 6–8-hour production time, so therefore quantities are limited. To get that amazing taste people rave about, you’ve got to be ready.